Learn about how to identify suicidal thoughts or impulses, where to go for help, and how to stand up for yourself if your college is not taking your concerns seriously

Many consider college the “best years of their lives.” But for others, being away from support networks of family and friends is extremely difficult. Add in the demands around everything from academics to making friends to picking a career, and those “best years” can become highly stressful. Some students going through this begin to contemplate suicide as a permanent solution to what are usually temporary problems with many other options for solving them. 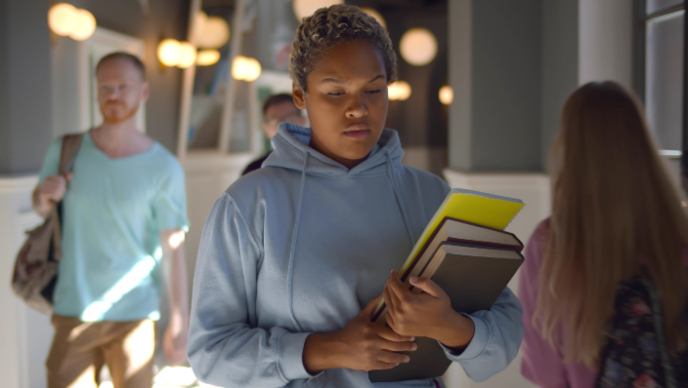 There were 9,188 suicides of Americans aged 18 to 29 in 2020, according to data from the Centers for Disease Control and Prevention, making it the third most common cause of death for young adults. That number is up from 7,942 deaths by suicide in 2015.

Suicide 101: Stages Leading Up to Suicide

The American Psychological Association defines suicidal ideation as “thoughts about or a preoccupation with killing oneself, often as a symptom of a major depressive episode.”

“Most instances of suicidal ideation do not progress to attempted suicide,” the definition concludes.

However, it’s important to treat this beginning stage as an opportunity for an early intervention to break the chain that leads to actual suicide attempts.

This is a good time to involve a therapist or other mental health professional who can help with suicidal impulses.

Some sources, including the CDC, define suicidal ideation to include making plans for suicide.

Most suicide, especially completed suicide, is not impulsive but the outcome of at least a rudimentary plan. The planning stage is where someone else can notice some new and perhaps telling behavior. For example, a young person getting their affairs in order seemingly out of nowhere or suddenly purchasing a firearm might be warning signs.

Suicidal attempts are the final and most grave of these stages. It’s defined by the CDC as “when someone harms themselves with any intent to end their life.”

By the time someone has attempted suicide, it’s an emergency situation. You need to react accordingly by calling 911 or the recently announced 998 number for suicides and other crises.

How to Know if You or a Classmate Needs Help

This is a list of warning signs that someone you care about may be considering suicide, with much of the list from the Suicide Awareness/Voices of Education (SA/VE). You can apply these criteria to someone you’re worried about or to yourself.

How to Help Another Student

This list of ways you can help someone who may be suicidal is also compiled from SA/VE and other sources.

If you’re a fellow student or friend:

If you’re a parent or other trusted adult:

How to Help Yourself

The list above is a good way to start in terms of helping someone in an acutely urgent situation. But what if that student you’re trying to help is you? How do you convince yourself to reach out for help, in or out of school?

Here are some tips on getting the most out of what your school and other resources can provide in a time of need.

This year, the government created a new nationwide phone number, 988, to supplement the 911 emergency services, which are often called on to respond to mental health emergencies.

As the government describes it: “When people call, text, or chat 988, they will be connected to trained counselors that are part of the existing Lifeline network. These trained counselors will listen, understand how their problems are affecting them, provide support, and connect them to resources if necessary.”

“The previous Lifeline phone number (1-800-273-8255) will always remain available to people in emotional distress or suicidal crisis,” the description adds.

Mental health advocates, including the National Association for Mental Illness (NAMI) have broadly praised the creation of a simpler, easier-to-remember mental health emergency phone number. Rather than calling 911, calling 988, in many cases, will be a way to deal with certain emergencies without the fear of law enforcement complications that keep many from calling emergency services for themselves or for someone else.

The students and staff at these centers can help cut anywhere from hours to weeks out of the search for help resources. The time saved can be crucial for students in crisis who are contemplating suicide.

If you’re feeling suicidal or worried someone else is about to attempt suicide, do your best to convey the urgency of the request. If you’re there to discuss someone else, it’s best to go in with notes or documented examples of concerning behaviors.

These mental health resource centers can direct you to off-campus resources. They also provide information on mental health care providers that are covered by the school’s health insurance plan or offer a sliding scale payment structure.

Speak with anyone at your school or search the college’s website to find out what mental health resources your institution offers or which local outside resources it recommends.

How should you answer the question, "are you feeling suicidal or do you have thoughts of harming yourself?"

This is a question that you get asked almost every time you reach out for mental health support. It can often be difficult to answer. Many worry that admitting they’re thinking about suicide will mean a therapist is obligated to report them to the authorities, setting off a cascade of legal and other problems.

But that is a common misconception, says Eileen Bowen, Director of Counseling at Inside Health Institute and a mental health practitioner.

Director of Counseling at Inside Health Institute

“The role of a therapist is to assess and take the best course of action. Reporting threat of harm is only done when someone is actively suicidal and will not work with the therapist to reduce the risk of suicide.”

That being said, therapists are under a legal requirement to report someone who is threatening to harm themselves or others if other interventions are working. You may want to clarify what are the next steps the therapist would take before giving a simple yes or no response.

A bigger concern than admitting you’re having these thoughts is doing it too late. It takes an immense amount of courage to step up and say, even to yourself, that you’re considering suicide.

But admitting it is a critical step, especially for your therapist, who is there to see you succeed.

It’s important for the mental health practitioner to have your most honest assessment of how you feel emotionally and mentally. Doing so gives them the information to decide on which potential courses of action to offer you. Remember that it’s your care, and you almost always have the final say in which direction that care goes. But also, keep in mind that most practitioners know what they’re talking about and want to see the best possible outcome for you.

A potential reason students don’t want to admit to suicidal feelings is that they're afraid they'll have to skip a semester or more, losing academic and social progress. But this is rarely the outcome. In reality, the school wants you to succeed and will generally make all reasonable requests to give you time to deal with mental health issues.

The primary issue students run into is documentation. But your therapist, school’s mental health resource center, or office of disabilities can help advocate for you and any scheduling requests you need.

You can talk to individual professors, but this could mean that your medical information might become public knowledge if they have not been trained to be discreet with your private information. However, if you follow the right procedures specific to your college, the administrative side of the institution should inform faculty that you’ve taken medical or other leave. This can further maintain your confidentiality and allow you a clean start when you’re ready to return to class.

Suicide, like many mental health issues, is becoming more acceptable to talk about. Still, there remains a significant stigma around the topic.

“We are often afraid to talk about it as we are afraid that saying the words out loud may make it worse rather than better for the person we care about,” says Bowen. “I can assure you that asking the question ‘are you feeling suicidal’ does not make it worse."

Rather, it can affirm the person’s reality that life has been difficult for them of late. It can remind them that someone is noticing their unhappiness and snap them out of what Bowen calls the “tunnel vision” around ending their life.

“This is usually a brief time where they can’t see any hope or possibility of happiness. With intervention, people are carried through the difficult time," she said. "If they don’t let anyone know, they may end their life with the false thought that there is no reason to live.”