Tribal Colleges and Universities in the United States: What They Are, Who They Serve, and Why They Matter 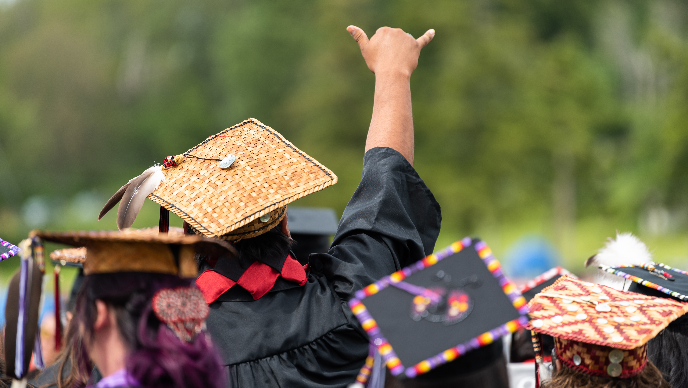 Before tribal colleges were established in 1968, Native American students had few options for a culturally relevant education. Most college efforts for American Indian students in decades past were focused on Christianizing or vocational training. When tribal colleges were developed in the late 1960s, tribes created schools to serve their students, with services that met the unique needs of their communities.

What Is a Tribal College?

Tribal colleges are schools that are owned and operated by Native American tribes in the U.S. There are 35 accredited tribal colleges in the United States, mostly located on or near reservations in the northern states and Southwest.

While most TCUs are community colleges where the majority of students earn associate degrees and certificates, 19 tribal colleges offer bachelor's degrees.

There are only a few four-year tribal colleges that award more bachelor's degrees than associate degrees: Haskell Indian Nations University in Kansas, the Institute of American Indian and Alaska Native Culture and Arts Development in New Mexico, and Sinte Gleska University in South Dakota.

Tribal colleges primarily serve American Indian and Alaska Native students, but students from other demographics can also attend. Most tribal colleges serve some students who are white, Black, Latinx, or another race.

TCUs receive limited funding from the federal government, but do not receive state funding like other public colleges do. They operate on a fairly limited budget, receiving just over $8,000 per American Indian student, although few schools serve a student population that is 100% Native American.

Why Do Tribal Colleges Matter?

Tribal colleges and universities play an important role in their communities. They are often located in rural areas where students don't have other options for college nearby, and tend to serve students from lower-income families. Native American students are more likely to come from a lower-income family, and are often the first in their family to go to college. These and other factors are often barriers to higher education for many students, and make accessible higher education options even more important.

One big reason why Native American students might attend a tribal college is representation, support, and student success on campus. Tribal colleges also offer culturally relevant curriculums, languages, and traditions that are often lacking on other campuses. A report from Gallup and the American Indian College Fund shows that students who graduate from TCUs tend to have better college experiences than other graduates nationally and than American Indian students at other schools.

These schools are also an important resource for Indigenous students and their communities — Gallup and the College Fund found that 74% of TCU graduates go onto careers related to American Indian communities, tribal lands, or work for the tribes themselves.

"Being at a tribal college, I feel connected. I'm learning tradition, I'm learning about my culture," said Northwest Indian College student Monica Little, a member of the Lummi Nation. "I think those teachings are important for us to find our sense of place in the community. I've learned so much about my native history that's just made my academic journey more interesting."

List of Tribal Colleges and Universities in the United States

College of the Muscogee Nation

Percentage of Students Who Are American Indian or Alaska Native

Nearly every tribal college serves a majority of American Indian and Alaska Native students. At non-tribal colleges, less than 1% of students are Native American.

Haskell Indian Nations University, Southwestern Indian Polytechnic Institute, and Stone Child College serve the highest rate of Native American students. Fond du Lac Tribal and Community College serves the lowest rate at 8%, and is the only tribal college where less than half of the student body is Native American.

Many tribal colleges have quickly adapted to serve online communities, with 10 schools serving more than half of their students fully online in 2020-21. Another 10 colleges had at least half of students enrolled in both online and in-person programs for the same year. Nine TCUs reported no students enrolled in distance education classes for the 2020-21 school year.

The top five largest tribal colleges by enrollment are below.

Ilisagvik College in Alaska and Fond du Lac Tribal and Community College in Minnesota serve the lowest rate of Pell students, with less than 25% receiving the grant.

Retention rates show how many students who enrolled in college the year before returned the next fall. They can help give a sense of how well students are doing and can serve as an early indicator of what graduation rates might look like down the road. Things like strong support services and quality programs help keep students enrolled and making good progress toward their degree.

The most popular majors for graduates of tribal colleges are business administration, liberal arts and sciences, general studies, and American Indian studies, based on IPEDS data for the graduating classes of 2021.

Research from Gallup and the College Fund shows that tribal college graduates tend to get better support and have a better college experience than students from other schools.

So what are tribal colleges doing differently? Students at tribal colleges are more likely to say they had encouraging mentors, and professors who cared about them and made them excited to learn while in college. Many students also benefit from culturally relevant traditions and curriculums on campus.

Monica Little said an important aspect of her success is how family-oriented her campus is. She is a single parent with three kids, and she doesn't think she would have thrived at another college.

"When I decided to go back to college, I knew that I needed something that would cater to my needs," she said. "It's just not as easy to be as committed as other colleges asked. But instead of not being able to be committed at Northwest Indian College, it's family-friendly."

Little said students are encouraged to bring their families to student events and activities. She was also able to bring her kids with her to campus when she did volunteer hours and an internship over the summer. These accommodations help students succeed in school, alongside benefits like the option for virtual classes, peer tutoring, support programs for personal growth and life skills, 24/7 mental health services, and emergency funding.

Students at tribal colleges are more likely to say they had encouraging mentors, and professors who cared about them and made them excited to learn while in college.

There are many grants, scholarships, and other funding sources available to help students at tribal colleges pay for school. One of the biggest sources of funding is federal aid, which students can apply for by filling out the FAFSA. This one application may help students get financial aid like the Pell Grant, state funding, and scholarships from their school.

Native American students can also apply for grants and scholarships from the Bureau of Indian Affairs:

These scholarships are limited to full-time students, and applicants will need to include their tribal affiliation (either proof of tribal enrollment/Certificate Degree of Indian Blood card or a parent or grandparent's enrollment and the student's birth certificate).

Confused about financial aid? See our Guide to Financial Aid for Online Students.

Tribal colleges play an important role in their communities and are uniquely able to offer an education rooted in Native American culture and tradition. They also make sure tribes, reservations, and those living in rural areas have access to affordable higher education options and can offer a student-centered college experience.

Tribal colleges and universities might be a good fit for students who are interested in learning more about Native American tribes, traditions, culture, and history, especially tribal members or those with American Indian heritage.