Student loan forgiveness is a band-aid. What will really solve the problem? 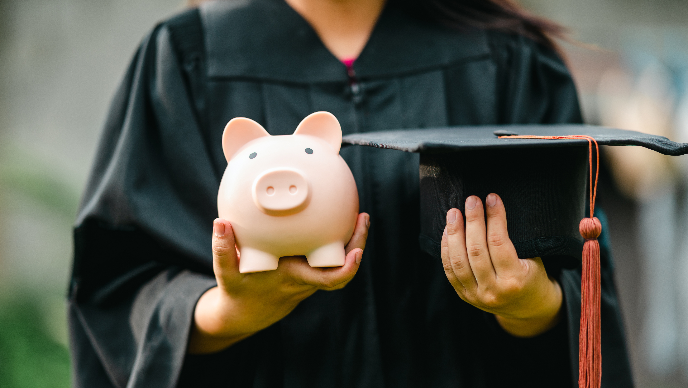 When President Biden finally announced his student loan forgiveness plan, millions of borrowers breathed a sigh of relief. But while it's projected to wipe the slate clean for roughly 20 million borrowers, it's a drop in the bucket for many others.

The student loan crisis has been a big talking point for the media and politicians over the last decade. As a result, today's students are desperate to avoid debt, even if it means not going to college.

"We have an incredibly important problem on how we pay for higher ed," said Katherine Lucas McKay, Associate Director at the Aspen Institute Financial Security Program. "The solution we tried a generation ago was to really load up families with student loan debt hoping it would pay off - It didn't work."

Instead of solving the problem, this strategy burdened an entire generation with levels of debt we just haven't seen before. It's preventing many Americans from contributing to their retirement savings or buying houses, and Lucas McKay says it's not uncommon for people to be paying their student loans until they retire.

The reality is that student loan forgiveness is a very necessary stop-gap solution for a problem that will persist unless meaningful changes are made at the federal, state, and institutional levels.

So what will prevent the student loan crisis from continuing to balloon? We asked experts to weigh in on potential solutions.

For most students from low and middle-income families, financial aid comes from the federal and state governments and the colleges they attend. Two big pools of federal aid include the Pell Grant, which mostly goes to families who make less than $60,000 per year, and work-study funding. States also use tax dollars to keep tuition down at public schools so local students have affordable options.

However, state funding has actually dropped in most states over the past decade, and federal programs like the Pell Grant haven't kept up with the rising cost of college and living expenses. Families are left to pick up more and more of the bill, often through loans. Here are a few policy options that advocates are pushing for to change that.

When students from lower-income families first used the Pell Grant to pay for college in the early 1970s, it covered about 80% of the cost of a public four-year university. Today, that number has plummeted to 30% as the maximum Pell Grant has failed to keep up with college expenses.

Phillip Levine, a Wellesley University economics professor and Brookings Institution fellow, is among the many people who argues that doubling the Pell Grant will open up free or low-cost education options for far more students from lower-income families — roughly 94% of students who receive the Pell Grant come from families earning less than $60,000 per year.

"The bottom line is what doubling the Pell Grant does is provide the right amount of money to the students who need it the most," Levine said.

The federal student loan forgiveness program is expected to cost $400 billion. Comparatively, the Pell Grant program cost 26 billion in the 2020-21 school year, the lowest amount paid out since 2008-09.

Today, the maximum Pell Grant is just under $7,000 and covers about 30% of what students need to pay for your average four-year public college, including room and board. Doubling the Pell Grant would mean students could get a maximum of $14,000, which would cover the full cost of tuition and fees with funding left over for in-state students at many public colleges. However, there are big state schools where the Pell Grant still wouldn't cover all of the funding.

Many different advocacy groups have pushed for some type of free tuition at publicly funded schools, whether it's four-year universities or community colleges. It was part of Bernie Sanders' presidential campaign in 2016, and Biden ran on a similar promise for two years of free community college.

Many see free tuition programs as a key tool to offer equitable access to higher education and keep student loans manageable for borrowers.

"I think free tuition is one of the most important long-term things" to help solve the student debt crisis and reduce borrowing, said Lucas McKay of the Aspen Institute. "It's really important to right-size the contribution that a student is expected to make and that their family is expected to make to the resources that students and families have."

"Ultimately that is going to mean that we need more public funding for public higher education and career training at the state and federal level," Lucas McKay said. "There's no easy way to solve this unless we robustly fund public higher ed institutions."

"College costs are an issue across higher education, but the student debt crisis is focused squarely on two groups of students: those who do not complete college, and those who complete degrees or earn credentials that have little to no value in the labor market," Alana Dunagan of the Christensen Institute wrote in a 2019 critique of free tuition promises.

Her article points to another point of contention many have with free college: Many people think there should be stipulations on what students should be able to study, and argue that funds would be wasted on degrees with less monetary or employment value.

One of the other downsides to the free tuition model is that the funding has to come from somewhere, and there are a lot of different programs competing for tax dollars.

"There's just no path to achieving the goal of higher education really being affordable to everyone who needs it if we don't increase public funding for state systems," Lucas McKay said.

Stopping the government from collecting interest on student loans was a key part of Bernie Sanders' plan to reduce the cost of college back in 2016. Federal student loans tend to be a better option than many private loans and tend to offer lower fixed interest rates, but they are not free. Interest rates for the 2022-23 school year are between 4.99% and 7.54%, depending on the type of loan and borrower.

"There are people who have much larger balances because of accrued interest," said Lucas McKay. "That's actually more normal than not."

Some borrowers see their loan balance double even when making on-time monthly payments and meeting their minimums. "That's illegal with credit cards. That's just not something that we allow," Lucas Mckay said. "You have to have a minimum payment that covers the interest plus some of the balance."

She argues that the federal government as a lender should hold itself to the same standard. "We should not charge interest or apply interest in a way that makes people who are making payments or people who have $0 payments under income-driven repayment plans see their balances grow," she said.

So what would the downside be to getting rid of or dramatically lowering interest rates for federal student loans?

"There would definitely be trade-offs," Lucas McKay said. "I can understand the idea of wanting to charge enough interest that you are not losing a bunch of money paying for the program to exist."

Keeping the program financially sustainable also prevents it from being a target when politicians or officials are looking to cut government costs, she said.

Some experts say eliminating interest on student loans could lead to an increase in borrowing, even if students and families had the money to pay for college, and the lost revenue would need to be made up somehow.

One of the most concerning borrower groups consists of people with debt but no degree. Millions of Americans owe money on student loans — which are gathering interest — but didn't finish their degree or gain the salary-boosting benefits to theoretically make their student loan debt worth it.

While there isn't much data available on how many students owe money for a degree they didn't receive, NCES data shows just 52% of students who enrolled in 2013 had finished their degree eight years later, while one in four had dropped off the school's radar.

There are a few ways schools themselves can help their students borrow less. For example, they can boost completion rates and create better student support programs, including wraparound services, to students who may be at risk of dropping out. This could help future students make it to the finish line and avoid being stuck with debt but nothing to show for it.

One such program that does this is completion grants, which were piloted at Georgia State University. The completion grant program identified students who were at risk of dropping out in their last few months of college before finishing their degree due to a lack of funding — many scholarships and funding sources run out after 4 years, and most students take longer to finish their degree.

By identifying seniors who needed additional funding and simply depositing an average of $1,000 in their school payment account to help them cover the last few months of tuition, Georgia State was able to close completion gaps and actually saw a return on investment by keeping those students enrolled.

Affordable options designed to reduce barriers to higher education, especially for returning adults, can help improve the chances that students will graduate and see the salary boost they expected.

Barrier-reducing strategies were built into the foundation of online college Western Governors University, said Regional Vice President Rick Benbow. WGU uses competency-based learning, meaning students can test out of classes they already have experience in, and their flat-rate tuition model allows students to take as many classes as they want at no extra cost.

These factors, combined with offering high-demand degrees developed with industry experts in business, healthcare, IT, and education, may help students see a return on their investment.

"The prevailing thought is that a college education, no matter the cost, will lead to a great job, and what we're seeing is that that may not necessarily be the case," said Benbow. "The impact technology is having on the job market means that by the time you graduate, the skills you've acquired in that four to six year period may be outdated."

One of the simplest solutions to reduce student debt WGU implemented? Telling students not to borrow more than they need. Under the university's Responsible Borrowing Initiative, every student who applies for financial aid is advised to only borrow enough to cover tuition and fees. The university's internal data shows students owe an average of 32% less at graduation compared to those who enrolled before the program was introduced in 2013.

Today's college students are so debt averse, many are choosing not to pursue a degree. The cost of living and of an education will likely continue to rise, and funding must come from somewhere. It's in the best interest of colleges, states, and the U.S. government to increase access to higher education. How viable each solution will be depends on what students and families, Congress, colleges, and public opinion can agree on.