Looking to Land a Prestigious Job After Your MBA? Here's a Look at the Best Schools

MBAs aren't one size fits all when it comes to outcomes. Using alumni LinkedIn data, we took a look at the MBAs that land graduates in the best jobs in consulting, investment banking, and tech.

Prospective graduate students around the world spend hours researching MBAs each year, looking for the best program to help them reach their professional goals – for many, that goal is to land a high-paying job at a prestigious company.

The MBA is often seen as the ticket into several different industries. However, even though most students know which field they want to pursue after graduation, there's not much information out there on which MBA program offers the best chance of employment in each sector. Instead of breaking down employment data by industry, MBA rankings typically look at whether or not alumni are employed at all.

We took a deep dive into MBA career outcomes to find out which programs offer the best post-grad potential for salary and which have the best results for a career with major companies in the top three industries for MBA graduates – consulting, investment banking, and tech.

Our findings show that employment outcomes vary widely from program to program; for example, an MBA that leads to a high chance of landing a great consulting job might not be the best option for someone looking to break into tech. Additionally, the best MBAs for a high salary aren't always the same programs with high employment rates at prestigious companies.

MBA programs are well-known for the salary boost they typically offer alumni, which help contribute to the degree's constant growth in popularity. We took a look at the top five MBA programs for alumni starting salaries, based on median alumni earnings one year after graduation provided by the U.S. Department of Education. 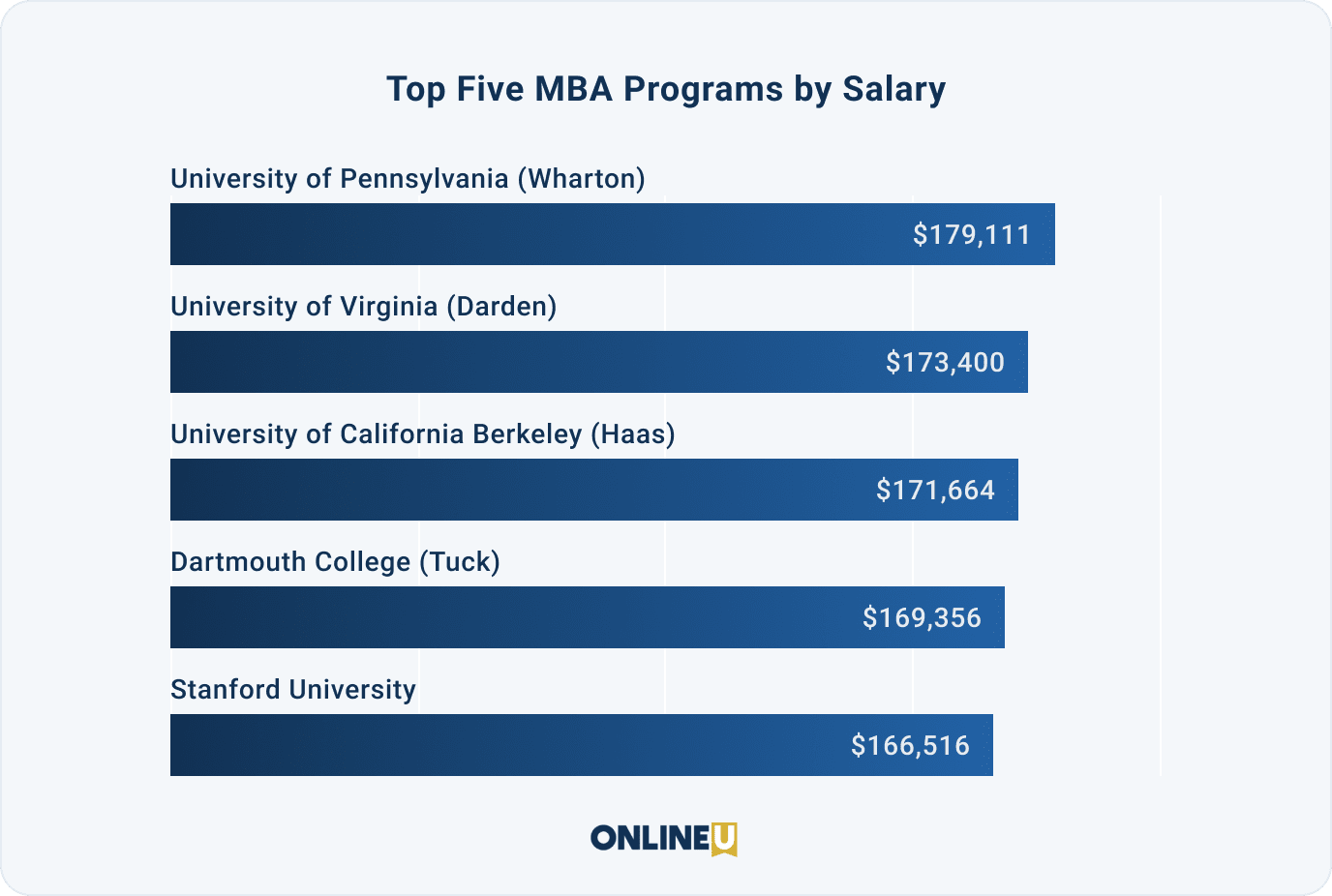 Earnings came from the most recent data from College Scorecard, provided by the U.S. Department of Education. This data reflects alumni who graduated in 2016 and 2017, with starting salaries measured in 2017 and 2018 and adjusted for inflation in 2019 dollars.

Consulting is the top industry for MBA candidates – 48% said they would prefer a consulting job after graduation on the GMAC 2021 Prospective Students Survey. Many business students enroll in MBA programs hoping they'll land a position at one of the eight most prestigious consulting firms.

We evaluated LinkedIn alumni data to find out which schools were top choices for hiring recruiters from leading firms. If you're pursuing a consulting position, these five schools are the best options.

Emory University Goizueta Business School is the second-best school for employment with a major consulting firm – 4.8% of MBA alumni went to top companies. Goizueta doesn't typically make the top 10 MBA programs in other rankings lists, so the school's high ratio of alumni at top consulting firms may be somewhat unexpected to those familiar with business school rankings. EY, Deloitte, and PwC are top employers for Goizueta alumni.

The McDonough School of Business at Georgetown University ranks third for leading consulting firm employment, with 4.73% of alumni working at a major firm. Deloitte is the top consulting recruiter for Georgetown MBA graduates.

Northwestern University's Kellogg School of Management has the highest total number of MBA candidates recruited at major consulting firms, due in part to its significantly larger alumni base. Just over 2,100 of the 47,118 Kellogg alumni listed on Linkedin work for one of the top consulting firms. Northwestern ranks fourth for leading consulting employment with 4.56% of alumni at leading companies. Accenture employs the most Kellogg alumni, followed by BCG.

The Yale School of Management at Yale University ranks fifth, with 4.48% of alumni at major consulting firms. Yale has the highest rate of MBA graduates working for McKinsey & Company.

We evaluated Linkedin alumni data for employment at top investment banking firms to determine which programs had the best career outcomes.

For MBA candidates seeking a position with a prestigious firm, the two best schools are located in the world's financial capital – New York City. NYC is also home to many leading investment firm headquarters, including the number one employer for all five MBA programs, Morgan Stanley.

New York University's Leonard N. Stern School of Business has a strong foothold in the investment banking industry, with by far the highest number of alumni working at the top three investment banks. Our analysis found that 2.49% of Stern alumni work for leading companies. A total of 434 Stern MBA graduates work for Morgan Stanley.

The Wharton School of Business at the University of Pennsylvania ranks third, with 1.16% of graduates in top investment banking firms. Wharton had 251 alumni at Morgan Stanley and 247 at Goldman Sachs. UPenn is also the best school for MBA salary.

Yale University's Yale School of Management had a lower number of graduates in top firms but still ranked fourth due to the significantly smaller MBA alumni base. Yale had 41 MBA alumni at Morgan Stanley, 38 at Goldman Sachs, and 36 at JP Morgan.

The University of Chicago Booth School of Business was the only top-five school located outside of the East Coast. A total of 143 Booth graduates worked for Morgan Stanley, according to Linkedin data.

As tech companies made massive financial gains in 2020, they continued to rise in the ranks of top MBA recruiters alongside traditional firms like McKinsey.

Our analysis of employment rates at Big Five companies based on Linkedin alumni data shows MBA programs at West Coast schools in major tech cities claim the top three spots. East Coast universities rank highly for the last two. UC-Berkeley is the only school that made the top five lists for big tech employment and MBA salary.

The Michael G. Foster School of Business at the University of Washington has a significantly higher rate (17.30%) of MBA graduates in big tech companies and comparatively fewer at major consulting and banking firms. The university as a whole is a top choice among tech recruiters. Amazon and Microsoft are the largest employers for Foster MBA graduates, with 711 alumni at Microsoft and 606 at Amazon.

Santa Clara University's Leavey School of Business has 7.28% of MBA graduates employed at one of the Big Five. The private school has a notably smaller MBA alumni base of 4,426 and is not traditionally seen as a prestigious school – U.S. News doesn't rank them at all on their Best Business Schools list. While it had high alumni employment rates at major tech companies, it had very low rates at top investment banking and consulting firms. It also outranks UC-Berkeley, which is in a similar location and near the same big tech firms. Google is the leading tech recruiter for the Leavey MBA program, with 111 alumni employed.

The MIT Sloan School of Management at Massachusetts Institute of Technology ranks fifth, with 4.70% of MBA alumni at major companies. Amazon is the top recruiter for MIT Sloan, with 391 listed alumni, followed by Google (246 alumni).

These four rankings can help prospective business school students choose a program that matches their professional goals. However, when considering the data as a whole, we gathered these key insights to help inform future research on MBA candidate outcomes.

Our top five best business school lists have very little crossover between MBA programs, indicating that some business schools may prove to be a better option than others, depending on a candidate's preferred industry and career goals. While students' options are often limited based on tuition, location, current job, and other factors, these lists indicate choosing schools based on specific professional goals may have a higher payoff financially or professionally for those who can do so.

Our findings highlight the fact that a high median salary for a given MBA program doesn't always line up with high employment rates at prestigious companies. The Wharton MBA at UPenn has the highest median salary but only ranks in the top five list for investment banking. The Darden MBA program at the University of Virginia ranks second for MBA salary but did not rank in any other top five list. Yale is included in both the top consulting and investment banking schools but ranks fifth for highest salary.

Tech salaries for MBA graduates may not be as competitive as some of the more traditional MBA recruiting companies in consulting and investment banking in the first year out of school. The University of Washington (Foster) blows other schools out of the water for employment in Big Five tech companies but is #19 for median salary. Santa Clara University (Leavey) ranks second for big tech employment but #20 for median salary. As tech continues to draw more MBA graduates, further research may need to be done on how tech employment impacts future earnings for early-career business graduates. However, tech companies may offer MBA graduates other benefits, such as a better work-life balance or company culture.

Median salary numbers came from the most recent data from College Scorecard, provided by the U.S. Department of Education. This data reflects alumni who graduated in 2016 and 2017, with starting salaries measured in 2017 and 2018 and adjusted for inflation in 2019 dollars.Tuition numbers were manually collected from each college's official website.

To determine which schools had the highest percentage of MBA graduates working at a top firm, we used LinkedIn alumni data to find employment outcomes of 25 prominent MBA programs in the U.S.

Due to the nature of LinkedIn data, these numbers are not absolute. Some graduates may not use LinkedIn, or may not keep their employment information updated. These data also may not capture graduates who worked for a top firm out of college but currently work for a different firm. However, LinkedIn is the best source of accessible information on these employment outcomes that allows for accurate and fair comparisons across schools.